Do not copy any photo without written permission.
Click on the picture to see a larger image.

It was promoted as "the most exhilarating, sensual, romantic and daring show the world has ever seen". Intimissimi on ice - OPERAPOP took place on September 20 and 21 in Verona, Italy. "We will offer the world scenes that no one has ever seen before," Marco Balich, who was leading the creative team of the show, had promised. And he fully kept his promise. 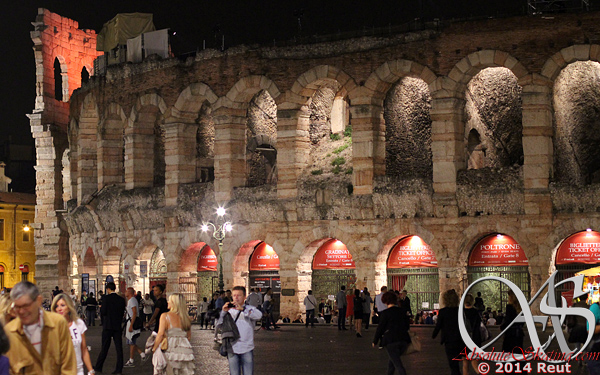 The show was rich with visual effects, on the ice and on the stage, with huge butterflies fluttering, flowers blooming, lightning flashing, and whatnot. The attention of the fashion world was attracted by the new collection of "Intimissimi" and the way it was embedded in the costumes of skaters and singers. The Italian press didn't seize to chant the praises of the top class pop stars - Pharrell Williams, Kiesza, Giorgia and Anastacia - who were invited to perform in the intermission, in the beginning and in the end.

But for us, of course, the skating aspect of the show was what we mainly came for. The complex choreography of the group numbers, the smart and creative involvement of singers and dancers in the skating routines; all were outstanding and one of a kind. The amount of effort which went into this production amazed us. Rehearsals took a few weeks, much longer that a regular skating show, or even one of high standards like "Art on Ice", usually requires. "We [even] did rehearsals for the quick changes [of the costumes], everything was rehearsed, and rehearsed, and rehearsed. We knew exactly how much time we need to wear the costume, or to get on the ice, who's entering from the left side of the stage and who's entering from the right one... you can not imagine... We worked so hard! It's the first time for a skating show to have so much energy put into it. We didn't calculate the hours, we just wanted to make it happen, wanted to show this to the world!" Stéphane Lambiel told his fans during the meeting the day after the first show. "Everyone really gave everything. Francisco [Negrin] and Nathan [Clarke] were the minds behind the show. Jeff [Buttle] did a lot of translations from the floor to the ice. When I was in some group numbers I also helped. And Carolina [Kostner], of course. So it was really a collaboration between all the skaters; a nice teamwork. We've never worked like that before..."

"I love everything!" Stéphane exclaims in excitement. "I love the story, the atmosphere, this building - it's a wonderful project!" While recalling the turmoil of emotions they all felt backstage minutes before the show started, Stďż˝phane defines the combination of opera and pop music as "a very good experiment" and the creation of such show as an "historical moment of our lives".

"Through the power of dreams, sensuality, passion and femininity, the show takes us from the harsh patterns of ice crystals to the soft and delicate patterns of lace. The show is a journey of transformation from a cold and heartless world to a world of romanticism, togetherness and delight," Marco Balich and Francisco Negrin explain in their introduction to the show program booklet.

The power of dreams

The fire in the soul

The garden of delight